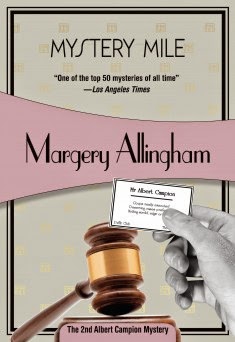 I picked Mystery Mile, by Margery Allingham, as my mystery for the Back to the Classics Challenge with the understanding that this was the first in her Albert Campion series.  It sort of was but not quite.  According to Wikipedia, Albert Campion first appeared as a supporting character in The Crime at Black Dudley (1930) before Allingham let him be the star.  So Mystery Mile is the first of a series of 18 novels in which he is the protagonist.

Mystery Mile, published in 1930, is quite a fun Golden Age detective story, complete with a country house full of charming socialites, kidnappings and disappearances, mob mayhem, witty banter, fast cars, country bumpkins, and young love?  Who could ask for more?  Well, I have to admit that I was pretty ticked off that Albert didn't get the girl in the end, but then I think that must be his cross to bear.

Wikipedia also says that Allingham created Albert Campion as a parody of Dorothy L. Sayers' Lord Peter Wimsey.  I can sort of see that.  Albert has a whimsical quality to him--he chatters in the slang of the day, but the reader and a few select characters are shown that he has a deadly serious side, a loving heart, and a noble streak that he strives to hide from the world.  I didn't see him so much of a parody as one cut from the same cloth.

I love Lord Peter and after just one book am awfully fond of Albert.  I intend to read more in the series--they're good fun, well-written, clever, and diverting.

I flipped through the book to see what caught my eye enough to make me earmark a page near the beginning of the novel.

One of the American characters, Marlowe, visits Albert at his flat above a London police station and notes how it is furnished:

It was tastefully, even luxuriously, furnished.  There were one two delightful old pieces, a Rembrandt etching over the bureau, a Steinlen cat, a couple of original cartoons, and a lovely little Girtin.

I looked up Steinlen cat on the internet and learned about Théophile Alexandre Steinlen, who in addition to paintings and drawings, also did sculpture on a limited basis, most notably figures of cats that he had great affection for as seen in many of his paintings.  I immediately recognized the cats in the posters and felt a little thrill as I've always liked Steinlen cats without knowing what they were. 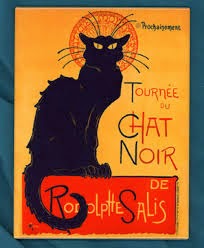 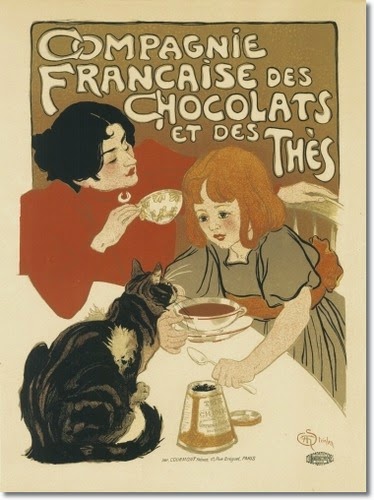 I also looked up Girtin and found out about Thomas Girtin (18 February 1775 – 9 November 1802), who was an English painter and etcher. A friend and rival of J. M. W. Turner, Girtin played a key role in establishing watercolor as a reputable art form.

Just knowing that Albert had a Steinlen cat (probably a sculpture) and a Kirtin watercolor painting in his flat makes me like him all the more!
at Saturday, August 09, 2014