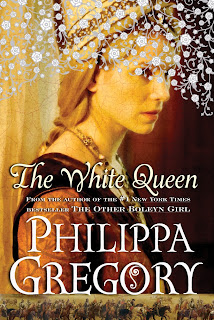 I admit that I approached reading The White Queen with more than a little hesitation.  First, I put myself firmly in the RIII fan club, having first encountered the theory that Shakespeare might have been a propagandist for the Tudors back when I was in college.  Josephine Tey's The Daughter of Time and Sharon Kay Penman's The Sunne in Splendour simply fueled my conviction that RIII has been slandered for the past 500+ years.

Then, there is the whole issue of Philippa Gregory playing fast and loose with historical facts to suit the story she wants to tell.  Much as I admire her storytelling skills, I do like historical fiction to be accurate.

I pushed all that aside when I discovered that there was a TV series based on the Cousins War series by Gregory and that it would be shown in the U.S. starting in August.  I knew I would have to watch it and so wanted to read The White Queen first.

I thoroughly enjoyed it.  I now have a much better appreciation for Elizabeth Woodville--who she might have been, and what motivated her--and her whole family.  I never lost sight of the fact that The White Queen is told from Elizabeth's POV, which enabled me to still hold fast to my image of  RIII as a much-maligned good guy (ala Penman's version).  When Elizabeth rants about Richard I can remind myself that she didn't like him, trust him, or know him.

In a way, that is one of the things that made The White Queen work for me.  Elizabeth, the protagonist, is an unreliable narrator.  Her past, her ambition, her fears, her prejudices, her loyalties all distort her perspective so that the reader gets her version of events, which may or may not be exactly the way they happened.  As a character, she is a witness to history, not a historian.  This is brilliant on the part of Gregory and is actually aligned with my own view of history and storytelling...everyone has their own side of the story to tell, and they're all valid.  Well, maybe George, Duke of Clarence, doesn't really have a valid reason to gripe, but that's George! 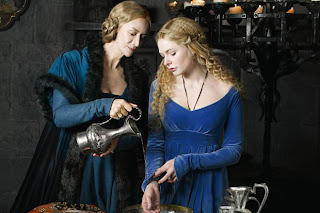 I also loved the magical elements that Gregory added.  Magic and witchcraft interspered with battles and politics made the whole experience more like The Mists of Avalon, especially when you realize that being descended from the river goddess Melusine is actually more important in the long run (e.g., inheriting the ability to see the future, make charms, and curse) than being descended from Edward III.  Taking that a step further, it is a matriarchal line that descends from Jacquetta to Elizabeth I and even to James I and the Stuart kings.  The men fight the battles but the women determine who sits on the throne. Pretty heady stuff when you think about it.

I just picked up a copy of The Red Queen from the library and am eager to see whether Gregory can work her magic again and make me sympathetic to Margaret Beaufort, my least favorite character in The White Queen and mother of nasty Henry Tudor. 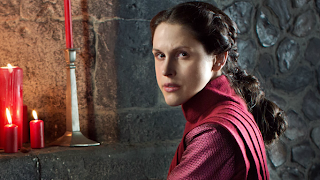