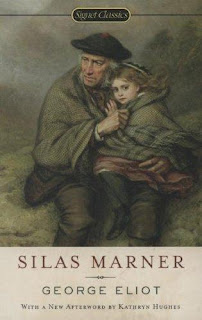 Katherine at November's Autumn is hosting the Classics Challenge and is posting prompts the 4th of every month. This month she is focusing on classic authors. Turns out she and I both are reading George Eliot. Here's a link to Katherine's post on Eliot, aka Maryann Evans.

Now it's my turn.

My first classic of the year is Silas Marner, by George Eliot. I first read this in tenth grade and didn't really warm up to it. What's to warm up to from the perspective of a 15-year-old girl? The hero of the story is unattractive in form and spirit--he has protruding eyes, is elderly (well, mid-30's, but that's elderly to a teenager, just ask Marianne Dashwood!), miserly, naive, and easily duped. We also read Ethan Frome the same semester and I saw Silas Marner and Ethan Frome as twin losers. Needless to say, Silas Marner was got through and quickly shelved and mostly forgotten.

A few years ago, I picked up the audio version from the library and thoroughly enjoyed it. Most of the details I hadn't remembered, and I found the story of the rebirth of Marner's soul and humanity to be moving, beautiful, and enobling. It didn't hurt that I had discovered Middlemarch in college and counted it among my favorite books when I reread Silas Marner. My admiration for George Eliot predisposed me to give Silas Marner a second chance, and I'm so glad I did.

Now, I'm rereading it again, as part of my George Eliot project (i.e., to read her books in order whilst reading a bio of her life), and it's interesting to see where it fits in the evolution of George Eliot as a novelist. I must say that with Silas Marner, she did set out to tell the story of a most challenging protagonist--even at my more mature vantage point, I have to say that he's still a pretty unattractive person at the outset. I have to believe that Eliot consciously picked an unattractive person for this story--I think the reader has to look on Marner with a certain amount of contempt in order for his redemption at the hand of a child to mean so much and to reflect so well the "man in the mirror," which I think Eliot strives to do.

I've only read the first two chapters, but the backstory has been fully told and Silas is a miserly misanthrope whose life is about to be transformed by grace. I'm really looking forward to reading lit crit about this book as well as what Eliot was trying to do with the story. It's much shorter than the two novels that preceded it (i.e., Adam Bede and The Mill on the Floss), and it's very tightly focused on one man, his soul and the child who saves him from himself rather than being about a family or a village or a way of life.