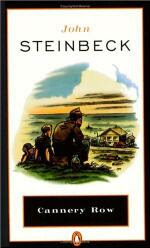 I've read a respectable amount of John Steinbeck, mostly when I was a teenager--Grapes of Wrath and East of Eden as a student, Of Mice and Men and The Pearl for fun because I liked Steinbeck--but it is Cannery Row and Sweet Thursday that I really think of when I think of Steinbeck.

Written nine years apart, Sweet Thursday is an elegy to Ed Ricketts, the man on whom the character 'Doc' is based, whereas Cannery Row is a tribute. Cannery Row was written in 1945, after Steinbeck had finally achieved fame and stature as a significant American author with The Grapes of Wrath. Sweet Thursday was written in 1954, after he had completed his second major work, East of Eden. Tragically, Ed Ricketts was killed in a car/train accident in 1948. According to the John Tessitore bio of Steinbeck that I read after finishing both books, "As a friend, parnter, confidante, and inspiration, Ed had influenced every part of Steinbeck's life. Steinbeck depended on Ed for ideas and support. And he felt alone."

It's not necessary to know any of this to enjoy both books, but knowing this adds a poignancy to the poetic prose of Steinbeck as he tells the stories of the world of Cannery Row that just about tears the heart strings to shreds.

Cannery Row is a slender book, just 123 pages in the Bantom edition I picked up decades ago. It tells the story of Doc, a marine biologist who lives amongst the bums, prostitutes, and small business owners in Monterey, California during the time when Cannery Row was still a thriving area (i.e., before the canneries canned so many fish there were no more fish to can).

But why should I try to describe Cannery Row, when Steinbeck's opening paragraph does it so beautifully and succintly:

Cannery Row in Monterey in California is a poem, a stink, a grating noise, a quality of light, a tone, a habit, a nostalgia, a dream. Cannery Row is the gathered and scattered, tin and iron and rust and splintered wood, chipped pavement and weedy lots and junk heaps, sardine canneries of corrugated iron, honky tonks, restaurants and whore houses, and little crowded groceries, and laboratories and flophouses. Its inhabitants are, as the man once said, 'whores, pimps, gamblers and sons of bitches,' by which he meant Everybody. Had the man looked through another peephole he might have said, 'Saints and angels and martyrs and holy men,' and he would have meant the same thing.

Steinbeck provides a marvelous set of inhabitants who in their bizarre little world, light years from my own world, work out a working society that I recognize as one in which I inhabit. In addition to the god-figure, Doc, whom everyone adores, there is Mack, a natural born leader and head vagrant who leads his merry men on the great frog expedition; Lee Chong, the grocery store owner; Dora, the madam; Eddie the part-time bartender who pours leftover drinks into a jar that he takes home to the flophouse where he lives with the other bums; and Gay, the mechanical wizard who can instintively fix any vehicle.

The crux of the story is how the inhabitants of Cannery Row keep on trying to "do something nice" for Doc, but whatever they do, it goes hopelessly, fantastically awry, leaving nothing but a monstrous mess for Doc to sadly but philosophically clean up.

Cannery Row definitely has its funny scenes--how could it not, given its cast of characters--but it has a depth and warmth that transcend the quirkiness so that the ending wraps the story up in a beautiful poetic reading of "Black Marigolds" that leaves the reader in the same "golden pleasant sadness" that Doc experiences.

Although Steinbeck begins Sweet Thursday with a chapter that explains "What Happened in Between," it really feels like it could be the next day. Sure, Doc has been to WWII and back, and yes, he is at loose ends, struggling to fulfill his own expectations of himself as a contributing scientist, but the main point of the story is how the inhabitants of Cannery Row (now a run-down, deserted area since the canneries have now closed) try to "help" Doc. And since this is an elegy to an old friend, this time around Steinbeck allows them to succeed.

If you've ever seen the marvelous movie Cannery Row, with Nick Nolte and Debra Winger, then you should know that 90% of the movie plot is from Sweet Thursday with only the great frog hunt being from Cannery Row. I think the movie is a faithful and loving adaptation of the book, and it's hard for me to read the book without thinking of the movie.

Debra Winger is perfect as smart-mouth, tough-girl Suzy, who is a lousy hooker but a great waitress and fixes up the boiler she lives in and makes a home of it. Nick Nolte is wonderful as Doc--capturing his loose intensity, confident diffidence, and sweet tolerance that cracks when certain pressures are applied. Audra Lindley plays Fauna, the current madam of the Bear Flag Restaurant (i.e., the whorehouse), flawlessly. And the script is awesome, with whole passages of dialogue lifted straight out of the book.

My favorite bits? Hazel, the mentally disabled bum (sort of like Lennie in Of Mice and Men) who struggles with his destiny to become President of the United States; the costume ball with the Snow White and the Seven Dwarves theme in which Mack and the boys are dressed as trees from the forest; the great frog expedition (of course!) and the subsequent frog currency and associated inflation; Doc's theory of apoplexy in octopi. Seriously, I loved reading about his collection of flora and fauna. 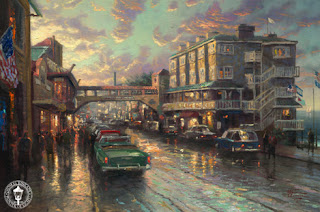 This post is part of the Classics Circuit Steinbeck tour. Be sure to visit other bloggers on the tour and read about East of Eden, Grapes of Wrath, The Pearl, Travels With Charley, and the other marvelous works of this Nobel winning author.