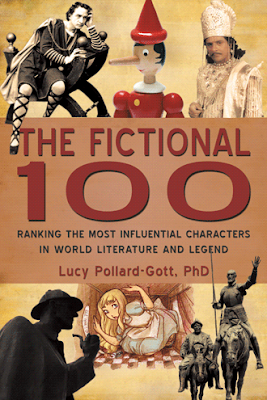 I started Lucy Pollard-Gott's The Fictional 100: Ranking the Most Influential Characters in World Literature and Legend last week and am happy to report that it is as fun and interesting to read as I suspected.

Inspired by Michael H. Hart's The 100: A Ranking of the Most Influential Persons in History, Pollard-Gott provides her own ranking of the most influential fictional characters in history. Like all rankings, whether they be of best universities, best party schools, best Austen novels, the reader feels compelled to read with one eye looking for holes--who was left out or who should've outranked whom. Nevertheless, I went into this with an open mind, and so far can't really quibble with the first 10.

One other comment on who's in and who's not--Pollard-Gott spends a fair amount of time in her introduction explaining her criteria for inclusion. For example, King Arthur is not eligible for inclusion because there is evidence that he really existed, albeit in a less Romantic manner than Camelot suggests. Some Biblical figures are included--for example, Adam, Eve, and Noah because their existence cannot be "pinpointed historically by date"--but not others, such as King David.

So on to the first ten...I absolutely loved the writeup on Hamlet, partly because I love Hamlet, the play and the character, and partly because it was so interesting. Glad he leads the pack! I also learned about an interesting play that was written and performed by Lynn Redgrave, Shakespeare for My Father, and which sounds absolutely fascinating.

Odysseus (Ulysses) is number two--good thing I finally got around to reading The Odyssey a few years ago so that I could fully appreciate this entry. I loved the description of Odysseus that Pollard-Gott includes: Odysseus is "'an excellent all-rounder' who fights well, speaks well, and thinks well. He can plough a field, build his own boat, outrun and outbox younger men, and shoot an arrow through twelve axes!" I thought Odysseus was a nice counterpoint to Hamlet.

Don Quixote came in number three. While I haven't actually read Cervantes' novel, I'm moderately familiar with the character, and really enjoyed learning about the history of the novels, Cervantes wrote sequels to his most famous work, and how wildly popular it was. Now I'm going to have to read the novel. How can I not have read this book?

Eve came in number four, and I loved the description of her--from the notion of her having the first conversation in the Bible (i.e., with the serpent) to the notion that "Adam may have been the first human being, but Eve was the first to be truly human." Go Eve!

I confess that the most interesting writeups are those for characters I am familiar with, so #5 Genji, #8 Chia Pao-yu, and #10 Arjuna, while instructive, weren't as memorable.

Oedipus at number six seemed in the right place--I loved reading Sophocles' plays on Oedipus in high school and I had never connected the Oedipal dots with regards to Back to the Future before.

Having grown up on a diet of Saturday afternoon at the Metropolitan Opera, I felt on comfortable ground with number seven, Don Juan, who is definitely an anti-hero. I also really liked the discussion of Don Juan in relation to Faust because I tend to mix up the two in my mind anyway, and I guess I'm not the only one.

I have mixed feeling about Sherlock Holmes at number nine. I don't argue about his immense popularity over time (although his time in our culture is markedly shorter than most of his peers), but I wonder if he will outlive the 21st century as a character? I suppose as a type, though, he's already been reincarnated as Mr. Spock and Adrian Monk of the Monk TV series and countless other cold, logical detectives with friendly side-kicks.

I'm looking forward to reading about the next ten in the Pollard-Gott's top 100--what's great about this book, is that it is presented in small, easily digestible chunks so I can keep it handy and read about a character when I am between longer books or just need a break.

Visit Fictional 100's website where you can find more info and a list of books and other resources on many of the characters in the book.
at Saturday, September 11, 2010

Email ThisBlogThis!Share to TwitterShare to FacebookShare to Pinterest
Labels: Lucy Pollard-Gott, The Fictional 100