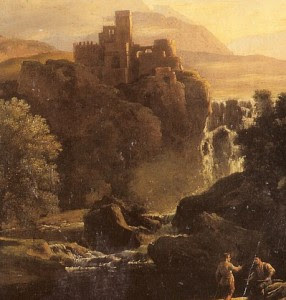 It's not even summer yet in the U.S. and already I'm anticipating October reading by diving into Gothic novels. I have only Northanger Abbey to blame. After rereading it earlier this year, my regional JASNA group decided to explore the reading list that Isabella Thorpe gives to Catherine Morland.

The Mysteries of Udolpho by Ann Radcliffe, 1794
The Italian, or the Confessional of the Black Penitents by Ann Radcliffe, 1797
Clermont, a Tale by Regina Maia Roche, 1798
The Mysterious Warning, a German Tale by Eliza Parsons, 1796
The Necromancer; or, the Tale of the Black Forest, by "Ludwig Flammernberg" (aka Carl Friedrich Kahlert, 1794
The Midnight Bell by Francis Lathom, 1798
Orphan of the Rhine by Eleanor Sleath, 1798
Horrid Mysteries by the Marquis de Gross, 1796
The Monk by Matthew Gregory Lewis, 1796
Castle of Otranto by Horace Walpole, 1794

I chose the most popular of them all, The Mysteries of Udolpho, and the one that Catherine actually reads in NA, and I'm happy to say that I am closing in on the ending and will be posting on it soon.

In the meantime, I asked my JASNA friend, Maxene, if she would allow me to post the wonderful paper she developed a few years ago on the Gothic novel. She agreed, and here it is. In the words of my beloved Jane Austen, "run mad as often as you choose, but do not faint!" There is a lot of fainting in Gothic novels, but they are not for the faint of heart. 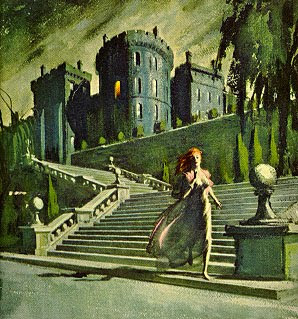 By the late 18th century, literacy in England had spread from the upper to the lower classes, and even servants, in their leisure time, joined the reading public, along with many women. Thus, literature reached a far wider audience than ever before. This new readership could now take advantage of the many circulating libraries available. There was also more of a tendency for people to seek out reading for simple pleasure and relaxation rather than for educational or religious purposes. During this period, especially in the years between 1790 and 1820, the most popular type of fiction read in England was the Gothic novel.

Horace Walpole’s Castle of Otranto (1764) is considered the first Gothic novel. A slight book, it is significant for its influence on those Gothic writers yet to come. This book introduced the elements of Gothic fiction, among which feeling is the distinctive attribute. Coral Howells, in her Love, Mystery and Misery: Feelings in Gothic Fiction, states: “Gothic fiction with its castles and abbeys, persecuted heroines, ghosts and nightmares, projects a peculiarly fraught fantasy world of necroses and morbidity—it is a shadowy world of ruins and twilit scenery, lit up from time to time by lurid flashes of passion and violence.” Gothic fiction contained descriptions of imaginary landscapes set in forests and mountains, had a large cast of characters, and, above all, was full of exaggerations.

There was no real successor to Walpole until 1777 when Clara Reeves’s Old English Baron was published. However, it wasn’t until 1789, with the publication of her Castles of Athlin and Dunbayne that the most important and most popular Gothic novelist, and the writer considered the founder of Gothic fiction, came on the literary scene: Ann Radcliffe. Of her five Gothic romances, written between 1789 and 1797, the most famous are The Mysteries of Udolpho and The Italian. Mrs. Radcliffe was a master of landscape description and specialized in terror by suggestion underlaid, however, by a basic rationality. Behind the terror of the Black Veil in Udolpho is something that can be explained.

After Mrs. Radcliffe, Gothic fiction evolved from terror to horror. One explanation for this evolution is the abundance of Gothic architecture which was available for first-hand inspection during the last decades of the 18th century. Earlier Gothic fiction relied for its effects on the damp, tortuous corridors of crumbling castles and abbeys. In reality, people were now able to see that these built Gothic buildings were light and airy. As one critic explains: “The effects of Mrs. Radcliffe and her heirs were dependent on obscurity and between 1790 and 1810 that obscurity was to be undermined.” Real, built Gothic was no longer a matter of mystery and irrationality, so written Gothic began to employ more stereotyped and extreme Gothic settings and shifted away from the suspense of Mrs. Radcliffe’s books to the described horrors of, for example, Matthew G. Lewis’s The Monk (1796).

The Monk plunges us into a world of horror with semi-pornographic elements in it. It is “a nightmare of fiendish wickedness, ghastly supernaturalism and sadistic sensuality.” Sounds delightfully repellent! And we remember that John Thorpe thought it a “tolerably decent” novel and had “read that t’other day….” C. Robert Maturin’s Melmuth the Wanderer (1820), published near the end of Gothic fiction’s popularity, is the greatest novel of the school of horror but includes within it some more complex psychology. There were hundreds of stories written in imitation of Radcliffe, Lewis and Maturin. Public demand for morbidly sensational fiction was also satisfied by a host of minor writers: for example, those published by the Minerva Press, most of whose work was repetitive and sensational in the extreme.

By 1816, the first great popular passion for Gothic romances had passed its peak. By the 1820’s, ‘Gothic’ had become a derogatory if not an abusive word. But Gothic conventions were assimilated into the imaginative literature of Romanticism. Mary Shelley’s Frankenstein (1818), more psychological but with Gothic elements, is the most lasting example.

Gothic fiction, however, is significant for its attempt to write a new kind of fiction dealing primarily with feelings and with emotional and imaginative awareness, elements more typical of poetry and drama than of the novel. “These explorations were expressed through exaggerated imagery in which contemporary readers found excitement, suspense and beneath it all an interplay of the passions they covertly recognized in themselves” (Howells).

And this brings us to Jane Austen, who, with her family, read widely in Gothic fiction and enjoyed what she read. In a letter to Cassandra, dated October 24, 1798, Austen writes: “My father is now reading the Midnight Bell, which he has got from the library….” This book had just been published earlier that very year.

Almost every element of Mrs. Radcliffe’s novels is exactly the sort of thing Jane Austen went out of her way to avoid, the exact opposite of her “little bit of ivory.” Austen wrote Northanger Abbey when Gothic fiction’s popularity was at its peak and after Mrs. Radcliffe’s Udolpho had enthralled the reading public. But she acknowledged in her Advertisement to Northanger Abbey, in 1816, that she was aware popular taste had changed and that Northanger Abbey contained obsolete elements--nowhere so obsolete as in Isabella’s list of horrid fiction that she imparted to Catherine. None of these books was written after 1798. To some, though, this list does suggest the beginning, peak, and decline of the Gothic novel, just as Catherine’s questions about Blaize Castle’s age, keep, ramparts and towers suggest the phases of England’s long history of castle building from the keep of the 12th century through the ramparts of the 13th and then to the towers, a feature of late medieval castles. If Northanger Abbey is a parody of the Gothic novel, it also has elements which show Jane Austen’s affinity to it. She doesn’t so much reject the Gothic because it is different from life, but because it can so easily distort someone’s real life responses. As we all know from reading Northanger Abbey, real life and Gothic fiction aren’t so very completely different as Henry Tilney believed them to be. 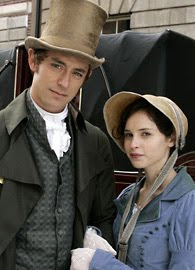