Heyer's Envious Casca Versus Why Shoot a Butler: 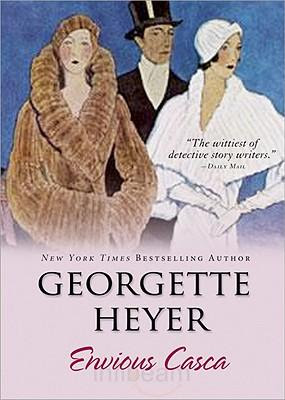 For the Classics Circuit Georgetter Heyer tour, now in its second week, I wanted to dive into Georgette Heyer's mysteries, having already read a fair number of her Regency Romances.

I happened to be in my favorite used bookstore last month and glanced at the Heyer shelf in the Mysteries section and the only one they had was Envious Casca, so I snapped it up. It is one of her later books, written in 1941, and left me a quite underwhelmed, frankly.

Not willing to dismiss Heyer as a mystery writer based on one book, I asked for advice from a bookie friend who adores Heyer and was given a list of the best Heyer mysteries. This list includes Behold, Here's Poison, Why Shoot a Butler?, The Unfinished Clue, Death in the Stocks, and A Blunt Instrument.

Why Shoot a Butler? turned out to be the easiest for me to get my hands on, and I'm happy to report that it is vastly superior to Envious Casca.

So let's do a little compare and contrast.

Both mysteries are set in English country manors, with a cast of mouldy upper crust types, servants, incompetent members of the local police force, and local villagers. Casca is more tightly focused on a single gathering--in this case Christmas--in a single venue, and I had a hard time getting all the characters and their relationships straight. Plus, they were a singularly disagreeable set of people--none were witty, interesting, likeable, or even appealing so I had to struggle to get to know them. You had your irascible codger who held the pursestrings to the family fortune, his favorite nephew who was equally disagreeable and his hopelessly idiotic fiance, his strident niece, her playwright boyfriend, the plain, sensible-shoes female relative, and servants with a grudge. What you didn't get in this book was a slueth, amateur or otherwise, who you could care about as he/she solved the mystery.

The detective Hannasyde doesn't arrive on the scene until very far into the book, and not having met him before, I felt no sense of relief when he showed up and I had no interest in whether he could solve the mystery or not. I've heard that this is not the only Heyer mystery in which he figures. If so, then I think Heyer took for granted that her readers knew his back story because she gave precious few details related to what made him tick. Without a slueth to care about, the mystery really was not much more than a puzzle to be figured out--I read for the story, for the emotional connection to characters, and that was lacking in this story. The whodunit part was clever, but at the end, I simply felt relief that I no longer had to be in the company of all of these disagreeable people.

Why Shoot a Butler?, though similar in many ways to Envious Casca, does have a slueth, Frank Amberley, that we met on page one and whose safety, emotions, well-being, and future happiness I felt a stake in. Plus, Frank is a classic Heyer hero--a bit mysterious, a dry wit who doesn't hesitate to engage in wonderful repartee, and tosses off asides and bon mots with the best of them. He's dapper, clever, urbane, and tenderhearted. He solves the mystery with style, shows courage and cunning, and is the reason why this book restores my faith in Heyer.

Why Shoot a Butler? was published in 1933, and has none of the tired, "writing by rote" feel that Envious Casca betrays. I don't really know much about Georgette Heyer, but you can't really expect someone as prolific as she was to hit the mark every time.

For those of you touring the blogosphere with Georgette, here is a post on The Grand Sophy that I wrote last July. I called it "The Grand Sophy: Merchant of Venice meets Oliver Twist meets Gone With the Wind."

Next on the Heyer lineup for me is The Infamous Army.
at Thursday, March 11, 2010