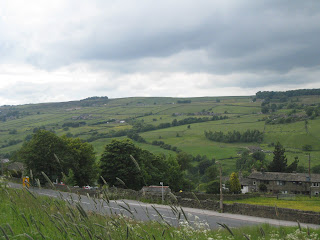 Last June, my then 16-year old daughter, Sarah, and I took a trip to Dublin-Shrewsbury-Stratford-Haworth-Whitby-Edinburgh. We had a wonderful time but somehow the travelogues got swallowed by Shakespeare postings and I realized that it was high time that Haworth was addressed properly.

Much as I loved visiting the Bronte Parsonage Museum, the Black Bull, the White Lion, and the rest of the town of Haworth, the part that I loved the most was escaping the narrow, stony town and walking on the moors up to Bronte Falls.

We had just one night in Haworth, arriving by train into Keighley about mid-day and then catching a taxi up to Haworth. After we checked into our B&B, we visited the Black Bull, where Branwell worked hard on drinking himself to death, and took loads of pictures while waiting for lunch.

Here's are our favorites from the pub: 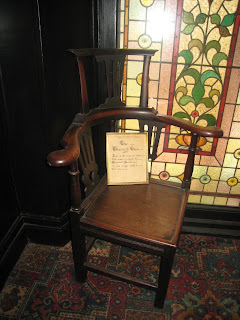 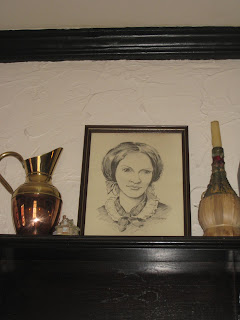 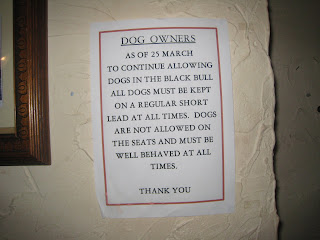 After lunch, we scurried over to the Parsonage and spent a glorious couple of hours going through all the rooms. I've read for years about what a tiny person Charlotte was, but seeing her actual clothes really drove home that point. It was also a real treat to see the tiny books that Charlotte, Branwell, Emily, and Anne made as children. The Museum store was jam packed with goodies and we ended up getting a couple of posters--a portrait of Emily and a water color of Top Withins.

Mother Nature got her rainstorm out of the way while we were in the Museum, so afterwards we decided to hike up to Bronte Falls before dinner. The road to the trail was fairly empty, and the trail was absolutely empty except for two groups of hikers that we met on the way down. I have no idea whether that is common or not--I had sort of assumed that the trail would be choked with Bronte fans paying homage, but we pretty much had the moors to ourselves on a fresh, beautiful June evening.

We ended the day with a dinner at The White Lion where we were both so tired we were practically falling asleep in our soup. Next day, we visited the church--all but Anne are buried in a vault below the church--and the graveyard where we saw headstone after headstone that marked the passing of a very short life. Only a few were for people who lived to old age--most were in their 20's or younger.

Haworth was definitely a pilgrimage that will remain vivid in my mind for a long, long time. As we were riding in the taxi up from Keighley, I mentioned how it felt like we were going back in time as the roads became cobbled and the streets narrowed. Sarah ended up wearing her glasses instead of contacts while we were there because the wood smoke from the chimneys stung her eyes. The parsonage, church and graveyard, Black Bull, and White Lion are all at the top of town--all the streets slope down from them, but the moors beckon you up out of the town. It truly is a remarkable feeling, that feeling of the hills calling to you to leave the smokey town and walk in the fresh air on the top of the world.

Final note - will someone please tell me who stole the "th" from Keighley? I fancy myself pretty good with the British pronunciation of place names, but I made a fool of myself at the train station in Stratford when I insisted that we wanted to go to Keighley (pronounced, I thought, "Keeley"). The woman selling the tickets kept on asking if I wanted to go to "Keithley" and finally I just pointed to the place on the map, and she said, "yes, Keithley!"

For the record, here is the station sign...no "th"! 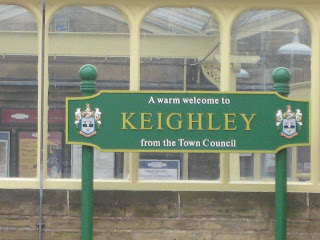 Here are more pictures of this wonderful little town in beautiful Yorkshire where some of the finest literature in the English language was written. Everyone we encountered was friendly and helped to make our time there thoroughly enjoyable. 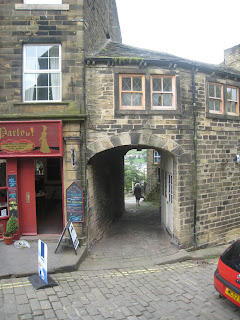 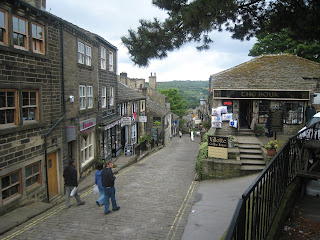 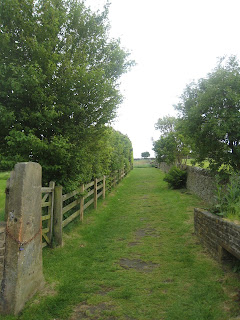 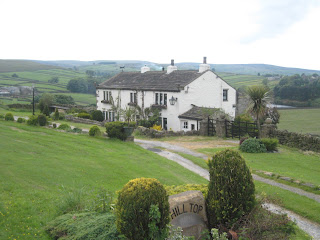