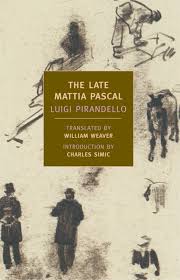 For this year's Back to the Classics Challenge, I wanted to read something by an Italian author for my translated book selection. I did a bit of research and landed on The Late Mattia Pascal by Luigi Pirandello.

Pirandello won the Nobel Prize for Literature in 1934 and is probably best known for his play, Six Characters in Search of an Audience. At least that was the only title that I recognized, although I haven't actually ever seen the play. The Late Mattia Pascal was published in 1904, before Pirandello began writing plays in earnest--he wrote over 50, as well as novels and essays.

Mattia Pascal is trapped in a loveless marriage in a small village. He is harangued by his mother-in-law, devastated by the deaths of his baby daughter and his mother, is losing his family home and business to swindlers, and is facing a mountain of debt. One night he has enough and feels he needs to break away for a little while to clear his head. He ends up on Monte Carlo, where fortune smiles on him. After four days of gambling, he has enough money to pay his debts. On the train while he is returning home, he finds a copy of his hometown paper, starts to read it, and discovers that he is believed dead by suicide. A body was found in the river and his wife and mother-in-law identify it as his. He sees this as a way to start his life over, an escape from the drudgery of his life.

This is the premise of the novel in which Pirandello explores what constitutes a happy life. After the surge of joy he feels at being liberated from his old life, Mattia finds that it is not as easy as he thought to build a new life without a firmly rooted identity, without social ties or family obligations, without purpose.

The novel is definitely a literary work. Pirandello explores his themes of identity and imprisonment on many layers, and the translation was rich and easy to read. That said, I found the character of Mattia to be frustrating. While he found many obstacles to being able to shed his old identity and make a new life for himself, I thought he was just not thinking very creatively about his situation. Here he was given the gift of a reset, and he squandered it.

I am looking forward to reading more classics by Italian authors.