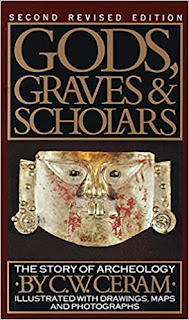 I was absolutely delighted to reread Gods, Graves, and Scholars: The Story of Archeology with the GoodReads group True Book Talk. I last read it when I was in my mid-teens, and it sparked my lifelong interest in Troy, Pompeii, and the entire ancient Mediterranean world.

Rereading it was an absolute treat, and I was so surprised to find that it is translated from German. Once I found that out, I did a little research on the author, C.W. Ceram.


C.W. Ceram was the pseudonym of German journalist and author Kurt Wilhelm Marek, known for his popular works about archaeology. He chose to write under a pseudonym to distance himself from his earlier work as a propagandist for the Third Reich.

Ceram was born in Berlin. During World War II, he was a member of the Propagandatruppe. His works from that period include Wir hielten Narvik, 1941, and Rote Spiegel - überall am Feind. Von den Kanonieren des Reichsmarschalls, 1943.

In 1949, Ceram wrote his most famous book, Götter, Gräber und Gelehrte — published in English as Gods, Graves and Scholars: The Story of Archaeology — an account of the historical development of archaeology. Published in 28 languages, Ceram's book eventually received a printing of over 5 million copies, and is still in print today.

Here's his obituary in the New York Times, which is worth reading lest you think that his work during WWII makes this book not worth reading. BTW, Ceram is sort of a backwards spelling of the author's real last name, Marek, which makes me smile.

The translation by Sophie Wilkins was absolutely brilliant. The book didn't ever read as a translated book, which can sometimes feel a bit formal or stilted. On the contrary, the book was easy to read, chock full of anecdotes and colorful asides, idioms, witticisms, and dry humor.

It truly is a survey of archeology through the middle of the 20th century, and while theories have evolved as more sites have been more fully excavated and science has advanced the ability to date objects, the history of the study of the ancient past remains riveting.

In the closing chapter, Ceram talks about what he doesn't include, namely the vanished civilizations that were in India and China. Despite those omissions, the book does cover a great deal of ground.

More than that, though, the author imparts his enthusiasm for his subject and makes me long to visit the sites, read more about each area, and definitely reread this book for a third time.