Posted by JaneGS
Hope everyone had a great holiday season. Much as I enjoy the festivities and yearly rituals and gatherings, I also really like getting my house cleaned up and my schedule back to normal. In addition to reading, I also managed to complete four puzzles between Thanksgiving and last night.

Here's the last one I did--we're going to Maine for 3 weeks in August and I figured it was a good way to start my learning about the great state. My husband is taking a 2-week course on building a sailboat and we have an Airbnb rented near Brooklin, ME. While he's in class, I will do some days of work, and some days of hiking, sightseeing, beachcombing, blueberry picking, and reading, of course! I cannot wait to explore Acadia National Park. 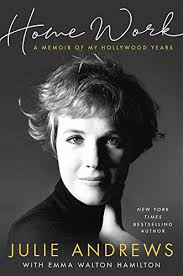 Home Work: A Memoir of My Hollywood Years, by Julie Andrews Edwards - this was a Xmas gift and even more enjoyable than her first memoir about her pre-Hollywood youth, which I read a few years ago. Loved reading about Julie learning her craft in real time while making Mary Poppins and The Sound of Music. I have to say, though, that I don't envy Julie her life, not one little bit. Yes, she had tremendous talent and luck, but she worked so hard, sacrificing family stability, moving several times a year, juggling nannies and other support staff, and being married to a very volatile man. While reading the book, I had the notion that I would like to watch all of her movies in order. I started The Americanization of Emily with James Garner but disliked it so much that I couldn't finish it and promptly abandoned the plan. I hope she does another memoir about losing her voice and also becoming the Queen of Genovia in The Princess Diaries. 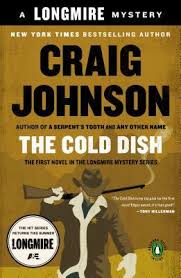 My husband has been reading the Craig Johnson series of Longmire mysteries for a few years now. He started after we watched the TV series, and since we recently rewatched the entire series  last fall, I decided to read the books as well, starting with The Cold Dish.  For the uninitiated, Walt Longmire is sheriff in fictional Absaroka county, Wyoming. His best friend is Henry Standing Bear, of the Cheyenne nation, and his staff includes deputy Vic Moretti, a tough-taking transplant from Philadelphia. The novels vary from the TV series quite a bit in plot--where the TV series developed its own story arc that included a casino on the reservation that causes all sorts of trouble for Walt as well as a rival for his office whose family is more than a thorn in Walt's side--the books are more episodic and don't carry a story line from one to the next. The TV series did an excellent job of representing the characters, however, and I see Robert Taylor as Walt while I read and especially Lou Diamond Phillips as Henry. Taylor, who is Australian, does a pitch perfect Western American accent, with my only gripe being he calls the other square state Col-o-rod-o instead of Col-o-rad-o.

If you like Westerns, this is an excellent mystery series, and if you liked Gunsmoke, the TV series will be like deja vu.

Oh, and the TV series has some of the best music. Here's my favorite - Back in the High Life Again by Warren Zevon. Picture Robert Taylor riding a horse across a mountain valley with this song playing and you'll get a pretty good idea of the TV Longmire.
at Sunday, January 19, 2020