Posted by JaneGS
What a perfect first book for RIPXIV!

Picnic at Hanging Rock has been on my TBR list for decades, and I decided to make it my "Classic from Africa, Asia, or Oceania " for the Back to the Classics challenge this year.  Set outside Melbourne, Australia in 1900, written by Joan Lindsay (she was 70 years old) and published in 1967, it is an intriguing story about the disappearance of three school girls and their teacher on February 14, 1900 at the picnic grounds at Hanging Rock, Victoria, Australia.

Hanging Rock is a real place (although actually lots of places carry this name). 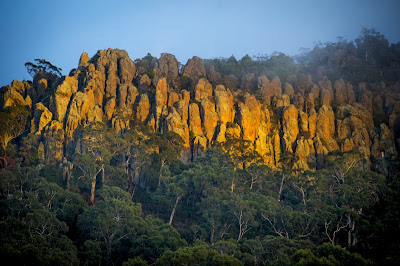 The girls attend the Appleyard College for Young Ladies, and the four girls who disappear are senior girls, about 16 years old, who get bored and decide to go have a look at the rock formation up close.  They are followed by one of the teachers who is chaperoning the picnic.

Mrs. Appleyard, the proprietress of the school for girls, has stayed behind at the school and is, of course, distraught when the party of picnickers return and she learns that some are missing.

The rest of the novel focuses on the efforts to find the girls and teacher--first by the police, and then by a young Englishman visiting relatives in the area who glimpsed the girls when they walked by his own picnicking party. He and the local groom take it upon themselves to search for the girls, with some luck.

The story of the novel is really about the effects of the stress that the disappearance of the girls and teacher have on the other girls and teachers and staff of the school, the two young men who were the last to see them, and Mrs. Appleyard, who must not only inform the parents of the missing girls but also face the prospect of closing the school due to negative publicity.

Be forewarned, the novel ends without any explanation of what happened to the girls and teacher. According to the foreword to the edition I read by Maile Meloy (who suggesting reading the novel before reading her foreword!), Lindsay did write a chapter that explained the disappearance but her "publisher told her to cut it, so she did." She did give the chapter to her agent with instructions to allow its publication after her death.

I agree with the publisher--the book is really good in setting the reader up to be engaged in wondering what could possibly have happened to the girls and teacher. Reading what the missing chapter contained was a bit of a letdown, so my advice is to read the book cold and then read about it after finishing it.

Other thoughts - I really liked how Lindsay showed how insignificant humans are in the world. Throughout, she talked about all the creatures who inhabit the landscape of Hanging Rock (the snakes, the insects, the animals, the vegetation), and how their worlds and ours coexist with little real interaction. I think Lindsay's vision is that sometimes these separate worlds collide and those collisions rip holes that cannot be mended.

A great spooky thriller with a grimness to it, set over 100 years ago in a mysterious, exotic setting.

With regards to adaptation...Peter Weir did a classic version in 1975 (which I have yet to watch), and then there is a 6 episode series from 2018 (also haven't seen). 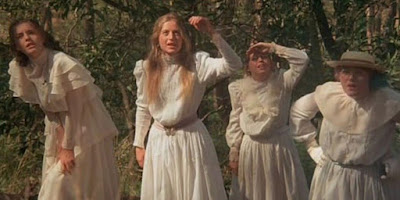 Finally, here is a fascinating article about the writing of the novel and the making of the Weir movie.  Lindsay said many of the scenes came to her in dreams, she wrote the whole thing in a few weeks, and was inspired by this painting, "At the Hanging Rock," by William Ford. 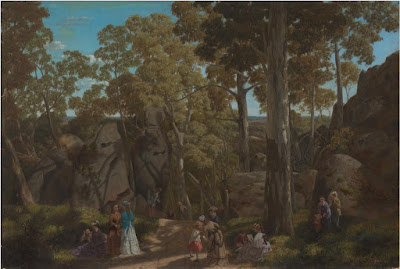 Email ThisBlogThis!Share to TwitterShare to FacebookShare to Pinterest
Labels: Back to the Classics Challenge, Joan Lindsay, Picnic at Hanging Rock, RIPXIV