Posted by JaneGS
I am loving September - the days are warm, the nights are cool, the tomatoes are ripe, and the raspberries are abundant!

Travel - we did a quick weekend trip to Port Townsend, WA for the 43rd annual Wooden Boat Festival. It was wonderful. Flew into Seattle--drove to Gig Harbor for lunch at NetShed #9, then drove up to Port Townsend. Checked into the lovely Palace Hotel (I think we got the last hotel room in town--must have been a cancellation because it was only 3 blocks from the festival dock), and then enjoyed the afternoon and evening. Had a great day on Saturday attending events, walking the docks, talking pictures, and enjoying the beautiful day. Drove back to Gig Harbor--had a fabulous dinner at Brix 25. Flew home to Colorado Sunday morning.  So much fun! 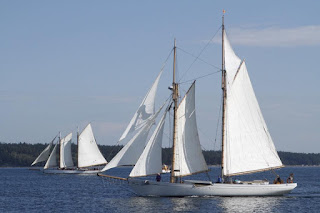 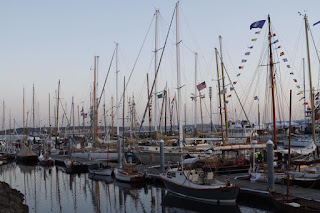 Here's what I've been reading...

Lavinia - my first Ursula Le Guin, very similar to Circe by Madeline Miller in that Le Guin tells the story of Lavinia, last wife of Aeneas, and a creation of Virgil who merely mentioned her in his story of Aeneas fleeing the aftermath of Troy and founding Rome. I enjoy seeing the women who are tangential to the mythic stories finally getting their day. I loved the relationship between Lavinia and the poet, and found her story of pre-Roman life on the Italian peninsula to be fascinating. I'm not a sci-fi fan, so I don't anticipate reading much of Le Guin, but this one was good.

Educated - memoir by Tara Westover, who told the story of her life growing up in a uber conservative Mormon home in Idaho with an abusive older brother, controlling parents, and a mountain on which she could roam at will. It was compelling and inspiring. Westover ended up educating herself with the help of BYU, Oxford, and Harvard. She is also a talented singer and I really enjoyed listening to her sing in a YouTube video that I found.

Fall of Giants - book one of Ken Follett's Century Trilogy, covering WWI through the experiences of a Welsh mining family, German and British aristocrats, Russian peasants, American politicians and journalists and gangsters. I enjoyed it immensely. It helped me wrap my head around the places and battles as well as the politics and societal stresses the marked the beginning of the 20th century. Follett is rapidly becoming one of my favorite authors. First rate storytelling against a huge backdrop. Definitely my kind of book. I fully intend to read the rest of the trilogy.

Hope you are enjoying this bridge month - as we shift to fall in the northern hemisphere and spring in the southern.
at Sunday, September 15, 2019