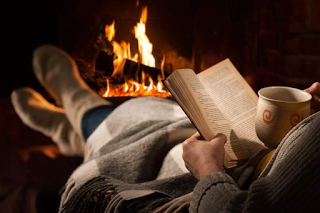 Wow, only one post in February. It's not that I haven't been reading, but I write so much in my day job that I need a break from it.

Nevertheless, blogging is a habit I'm not ready to break.

I belong to the fabulous Denver/Boulder region and our February meeting was devoted to discussing two books we decided to group read. I read both before the meeting, and it was such a treat to return to my beloved Austen world. 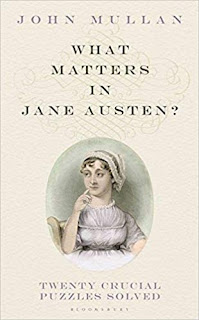 What Matters in Jane Austen? Twenty Crucial Puzzles Solved, by John Mullan - really enjoyable, although the title is a bit misleading. It's not that Mullan explains twenty plot issues that have puzzled readers. Instead he answers the question, what matters in Austen, with the simple declarative, Everything! In other words, whatever Austen takes the time to describe matters in terms of understanding how the novel and its themes and characters and worldview work. The weather matters, the distance between place matters, the complexion of a woman, the cut of a man's coat. Unlike most authors, Austen's details aren't there to help fill in a world, they are there to communicate important information about that world and its stories. I gave this book five stars--loved it and will reread it. Here's a short interview with the author, who is as charming as the book he wrote. 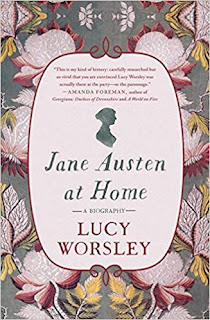 Jane Austen at Home, by Lucy Worsley - also very enjoyable. Essentially a bio of Austen, but with an emphasis on where she lived and what it was like to live where she did and what it meant about her family's socio-economic status at any given time to inhabit the houses, rooms, neighborhoods that they occupied. I've read a fair number of Austen bios so the most interesting part of this book for me was the time she spent in Southampton after her father died and before she went to Chawton. The cramped quarters, the damp, the near squalor were eye-opening to me and this is a time in her life that is often skimmed by. At one point, she was in a household of 8-9 women, including servants, with barely enough beds for everyone to lie down at night. Another excellent book and one I'm glad I read.

Our JASNA region is starting up a bookclub that meets on alternate months from our regional meetings, so I have a lot of Austen/Regency books to look forward to in the coming months.

Grandma Gatewood's Walk: The Inspiring Story of the Woman Who Saved the Appalachian Trail, by Ben Montgomery - I heard about this book on the wonderful blog Shelf Love, and knew I had to read it. Thankfully my library had an audio copy that I downloaded. I love to hike and walk and have dreamed of hiking at least part of the Appalachian Trail since the first time I read Bill Bryson's A Walk in the Woods. 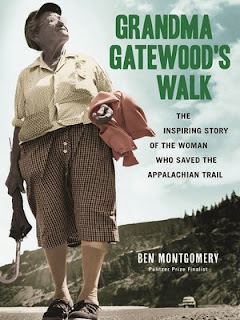 Emma Gatewood, at age 67, became the first woman to through hike the 2000+ miles from Georgia to Maine. She did this in sneakers, without a backpack or sleeping bag, and minimal provisions. She sought shelter in farms and houses along the way, but occasionally ended up sleeping rough on picnic tables, haystacks, etc. Not only that, she hiked the AT two more times, and walked the Oregon Trail from Independence, MO to Portland, OR...in her early 70s. She received incredible notoriety, and helped establish hiking trails in her home state of Ohio.

Montgomery does an excellent job of telling Emma's story and backstory and I liked the idea that he ultimately gave to her desire to long-distance hike alone--it was her way of taking back and owning her life. As an abused wife who nearly died at the hands of her horrible husband many times, when she finally broke free she was determined to live life on her terms. Truly inspiring.

I just got a guidebook for the Harper's Ferry section of the AT and am hoping to visit next year for a week or so to hike and explore the part of the AT that most appeals to me. 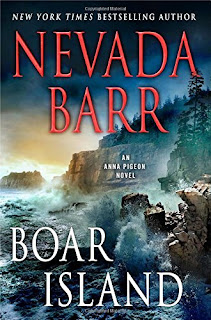 Boar Island, by Nevada Barr - I'm about 10 minutes away from finishing the audio book of another Anna Pigeon, NPS ranger, mystery. I have been reading Anna Pigeon mysteries for decades now, and enjoy them so much. This one takes place briefly in Boulder, CO - my stomping ground - and Acadia NP in Maine, which is near the top of the NPs on my bucket list. It's good, interesting, a bit coincidental at times, but still a fun book.

I decided in December that 2019 was going to be the year that I finally read War and Peace, by Leo Tolstoy. The idea initially was to read two books per month and that would get  me through most of the year. The problem with that plan is that it is so good, I just cannot stop. Now, I'm thinking that I can finish it in March and then treat myself to the Andrew Davies mini-series in April. 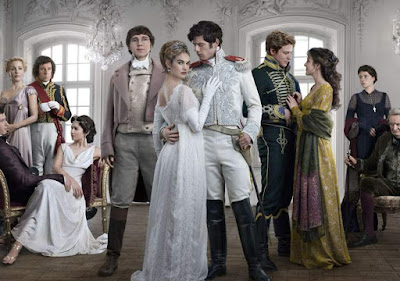 The battles are a bit challenging to read about since I know virtually nothing about the Russian part of the Napoleonic Wars, so I have to keep on referring to Wikipedia for info on places, people, events, etc. Luckily I am reading the Norton Critical Edition, edited by George Gibian, whose notes are exceptionally good and relevant with regards to history and Tolstoy. And they are at the bottom of the page so I can read them and not have to flip to the back.

Almost done with the second season of Medici - I had watched the first couple of episodes of season 1 last summer on the way to Paris, and then devoured it when we got home. So, I rewatched season 1 before embarking on season 2. I have to say, I think season 1 was the better of the two, but I just cannot get enough of the Tuscan countryside, the Duomo, and seeing the Renaissance art being created before my eyes. Definitely a fun way to get through the final (I hope) days of winter!

Happy March--looking forward to warmer days (it's been snowing all day today!), budding trees, crocuses, daffodils, walks after dinner and before breakfast, and lots of great books!