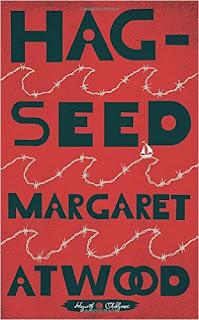 Hag-Seed, Margaret Atwood's retelling of Shakepeare's The Tempest, came to my attention because it was on the long list of the Tournament of Books for 2017, and I wanted to read a few of the contenders early in the year.  It turns out that Hag-Seed is also part of the Hogarth Press's Shakespeare Project in which popular modern authors revisit some of Shakespeare popular plays and do a modern rendition.

Here's what the Hogarth Press has to say about this project:


For more than four hundred years, Shakespeare’s works have been performed, read, and loved throughout the world. They have been reinterpreted for each new generation, whether as teen films, musicals, science-fiction flicks, Japanese warrior tales, or literary transformations. The Hogarth Press was founded by Virginia and Leonard Woolf in 1917 with a mission to publish the best new writing of the age. In 2012, Hogarth was launched in London and New York to continue the tradition. The Hogarth Shakespeare project sees Shakespeare’s works retold by acclaimed and bestselling novelists of today. The series launched in October 2015 and to date will be published in twenty countries.

Honestly, I don't often care for the results of projects like this, but since I really do like The Tempest I gave Hag-Seed a try, despite not much caring for the only other book I 've read by Atwood, The Blind Assassin.

Thankfully, it was worth the plunge.  I enjoyed everything about Hag-Seed.  I thought it imaginative, relevant, well-written with convincing characters and dialogue, and thoughtful.

The basic idea is that the Prospero character, Felix, is unfairly stripped of his director job at a Canadian theatre company, and goes into exile with the ghost of his dead daughter until circumstances provide him with the opportunity to teach his enemies a lesson and right the wrongs done to him.  The circumstances happen to be his staging of a production of The Tempest at a prison where he has been working as a literacy teacher, bringing Shakespeare to the inmates. I don't want to give away any spoilers, but the staging of the play is incredible.

There's a lot going on in Hag-Seed, and I'm not sure it would be nearly as enjoyable if I hadn't known The Tempest fairly well. I've read it multiple times and seen it on the stage three or four times, and seen several movie versions.  I hope they make a movie of this book, because I would absolutely love to see this production.

In addition to Felix and his set of inmates who play the rest of the characters--and his casting notes are priceless--I loved how Felix explained The Tempest, in the context of his own life.  What makes Shakespeare timeless is that reader after reader, generation after generation, can see their own situation in his words, and this book illuminates that beautifully.  Felix, teaching The Tempest in a prison because he is exiled from theatre company, has made imprisonment and revenge the major themes of his production. Half the time, reading Hag-Seed was like reading first rate lit crit, which I love to do.

Final note--I read part of the novel as an e-book and then checked out the audio version, and listened to part of it.  The reader's voice reminded me of Kevin Kline, who I think would be perfect in the role of Felix...should they ever make a movie of this marvelous book.

Has anybody else read any of the titles in the Hogarth Shakespeare Project? Vinegar Girl, Anne Tyler's take on The Taming of the Shrew, has some appeal as does Shylock is My Name, by Howard Jacobson.