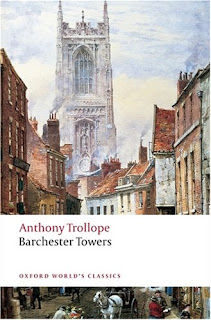 The Classics Challenge prompt for October is to "jot down some notes about the chapter you've just read or one that struck you the most. It can be as simple as a few words you learned, some quotes, a summary, or your thoughts and impressions."

For some reason, I've been in a blogging bog--reading as much as ever but not motivated to write much about it, so I like not having to do more than jot down some notes.

I just finished chapter 33, "Mrs. Proudie Victrix," of Anthony Trollope's Barchester Towers and it's actually a pretty good chapter to take notes on.

Despite the title, most of the chapter deals with Eleanor Bold.  She spends a lot of time trying to avoid Mr. Slope, whom she finds odious but who the rest of her family thinks she likes to the point of being willing to marry him.  Since she is on the outs with her family, she is spending a lot of time in the company of the new family in town, the Stanhopes, who are conniving to have her marry Bertie Stanhope, who reminds me a lot of Bertie Wooster actually--Trollope says that Eleanor likes Bertie but no more thinks of marrying him than she would have "a big tame dog," which is how she views him.

Eleanor also muses on Mr. Arabin--thinking about seeing him again, forgiving him for allegedly suggesting to her brother-in-law that was likely to marry Mr. Slope, and definitely not wanting him to see her arrive in the company of Mr. Slope, whom the Stanhopes have invited to the gala and who will be riding in the same carriage as Eleanor.  This whole "who-rides-with-whom" also reminded me of the Box Hill outing in Austen's Emma.

We get more assurances from the narrator that Eleanor is an absolute innocent--completely unaware of the massive amount of energy being wasted by virtually every other character in the book in trying to manipulate the affairs of her and her father, Mr. Harding, the book's other innocent.

Now to the chapter's title character...no innocent there.  Mrs. Proudie, along with Mr. Slope, is truly a masterful character--scheming, domineering, self-centered, power hungry. She doesn't even have Mrs. Quiverful's fourteen hungry children as a respectable motivator.  Dr. Proudie returns home after escaping the confines of the bishop's palace for a few days away from Mrs. P on official business, and he and Mrs. P. have another one of their awkward conversations that are really more like inquisitions than anything else.

I've been slowly reading Barchester Towers, along with a couple of other books.  It's enjoyably maddening in that most of the characters I went to beat with a wet noodle for being either manipulative or naive.  I can't say that I'm a hard-core Trollope fan, but I am happy knowing that I have oodles of Trollope novels available for future reading.

I am looking forward to watching The Barchester Chronicles BBC series from the early 1980s, especially after I learned that Alan Rickman played Mr. Slope.  A more perfect casting I cannot imagine.  I wonder whether J.K. Rowling had Mr. Slope in mind when she created Snape. 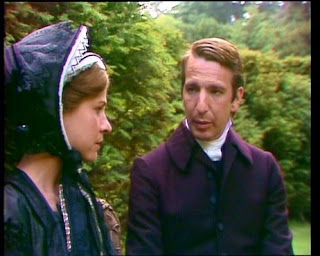