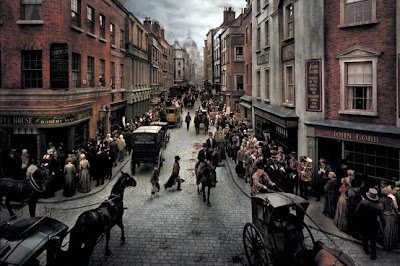 The novels of Charles Dickens are said to have created the image of Victorian London in the modern mind. Many say that Dickens' London is as much a character in his stories as any of the other fantastic, vividly portrayed characters--he wraps it in fog, he creeps along its maze of streets and alleys, he literally knows it as well as the back of his hand, from the grime under the fingernails to the rings and adornments that set it off to advantage.

While this is true in Little Dorrit as well, the setting of the story is one with the theme, prison. Every setting in the book so far, and I'm about three-quarters done now, is some type of prison, literally or figuratively. The story begins in a prison in Marseilles, moves to the Marshalsea prison in London, and depicts various forms of imprisonment that the characters somehow manage to impose upon themselves, whether that be a wheelchair, poverty, wealth, red tape, the past, idealized love, fear, or fantasy, to name but a few that Dickens explores. I'm still waiting to see if and how Dickens shows escape from imprisonment--my guess is that if he sees freedom as a real possibility for any of his characters it won't be in the form of a windfall from a dead relative. 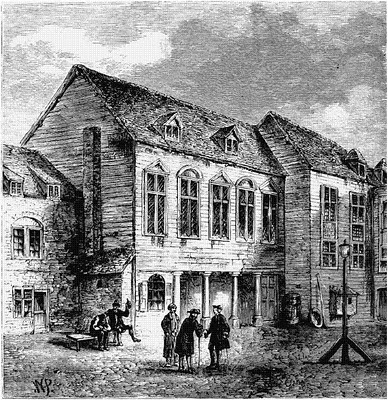 Here's a passage from chapter VIII, Book the Second, "Mostly, Prunes and Prism," in which Dickens articulates the convergence of setting and theme, when he describes the plight of the traveller:

It appeared on the whole, to Little Dorrit herself, that this same society in which they lived, greatly resembled a superior sort of Marshalsea. Numbers of people seemed to come abroad, pretty much as people had come into the prison; through debt, through idleness, relationship, curiosity, and general unfitness for getting on at home. They were brought into these foreign towns in the custody of couriers and local followers, just as the debtors had been brought into the prison. They prowled about the churches and picture- galleries, much in the old, dreary, prison-yard manner. They were usually going away again to-morrow or next week, and rarely knew their own minds, and seldom did what they said they would do, or went where they said they would go: in all this again, very like the prison debtors. They paid high for poor accommodation, and disparaged a place while they pretended to like it: which was exactly the Marshalsea custom. They were envied when they went away by people left behind, feigning not to want to go: and that again was the Marshalsea habit invariably. A certain set of words and phrases, as much belonging to tourists as the College and the Snuggery belonged to the jail, was always in their mouths. They had precisely the same incapacity for settling down to anything, as the prisoners used to have; they rather deteriorated one another, as the prisoners used to do; and they wore untidy dresses, and fell into a slouching way of life: still, always like the people in the Marshalsea.

Thematic setting aside, I was surprised to find the Dorrit family, et al, venturing out of London and England to the degree they did. In fact, part two of the book could well be called "Little Dorrit Goes on a Grand Tour." I was thrilled to find her navigating the Great St. Bernand Pass in Switzerland, and then in Venice and Rome.

For me, the image that will forever remain as my favorite from the book is Little Dorrit in Venice, chapter III of Book the Second, "On the Road"...

In this crowning unreality, where all the streets were paved with water, and where the deathlike stillness of the days and nights was broken by no sound but the softened ringing of church-bells, the rippling of the current, and the cry of the gondoliers turning the corners of the flowing streets, Little Dorrit, quite lost by her task being done, sat down to muse...

Sometimes she would step into one of the gondolas that were always kept in waiting, moored to painted posts at the door—when she could escape from the attendance of that oppressive maid, who was her mistress, and a very hard one—and would be taken all over the strange city. Social people in other gondolas began to ask each other who the little solitary girl was whom they passed, sitting in her boat with folded hands, looking so pensively and wonderingly about her. Never thinking that it would be worth anybody's while to notice her or her doings, Little Dorrit, in her quiet, scared, lost manner, went about the city none the less. 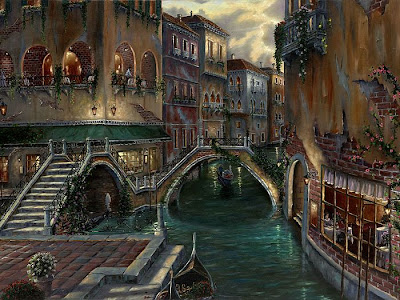 I'm eagerly looking forward to the mini-series of Little Dorrit, and I hope, hope, hope that this scene is included.

This post is part of The Classics Challenge, hosted by Katherine at November's Autumn. Stop by her blog to find out what other Challenge participants thought about the settings they read about in March.
at Thursday, March 22, 2012