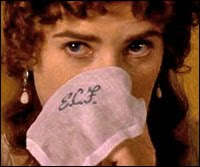 I've been thinking a lot about Lucy Steele this days. My story for the "Jane Austen Made Me Do It" contest tells the story of Lucy's circumstances leading up to her arrival at Barton Park and her campaign to keep Elinor Dashwood at bay.

Lucy is pretty much despised for her tactics in keeping her man--she lies and cheats and torments Elinor--but I've always admired her spunk, just as I admire Becky Sharp from Vanity Fair and Scarlett O'Hara from Gone With Wind.

So here's my thought for the day...

Margaret Mitchell declared that she was not influenced by Vanity Fair and Becky Sharp when she created Scarlett. I don't believe her and posted about the similarities between Becky and Scarlett here.

Now, I'm thinking that Lucy Steele is the literary precursor of both Becky and Scarlett. She is the anti-hero, full of energy, guile, and fearless when it comes to going after what she wants and thinks she deserves. In some ways, she is a very modern woman, who would be quite comfortable in any boardroom, making deals and driving hard bargains.

I'm not saying I'd want her for a sister and I wouldn't want to take her for a role model, but you have to admit that she is a force to be reckoned with.

When looking for images, I stumbled upon this post at Jane Austen Today, Lucy Steele Comes Clean about Sense and Sensibility, in which Imogen Stubbs, who plays Lucy in the Ang Lee movie, also sees Lucy as a Becky Sharp type of character. And here I thought I was being original!

Email ThisBlogThis!Share to TwitterShare to FacebookShare to Pinterest
Labels: The "Jane Austen Made Me Do It" Short Story Contest