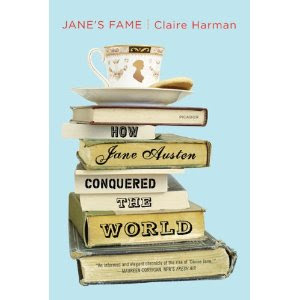 I guess my blog must've broken through a glass ceiling somewhere because I was recently contacted by Picador Publishing and offered review copies of a couple of Austen-related books plus a copy of each for a giveaway.

One of the books I had read and reviewed last year (Jane's Fame: How Jane Austen Conquered the World), but since I had read a library copy (gotta use the library so that it stays open!) I was happy to accept a copy and rerun my review in conjunction with a giveaway.

If you would like to enter the contest to win a copy of Jane's Fame, by Claire Harman, simply provide a comment below and include your email address. I'll add an extra entry if you tweet about it (send me your handle), blog about (send me the url), or even Facebook it (send me the url). Sorry, U.S. only! Deadline is 10 pm MT on Tuesday, February 8.

Jane's Fame: How Jane Austen Conquered the World by Claire Harman is an interesting, easy to read survey of Austen's popularity over the past two hundred years. Now that we are facing the bicentennial of the publication of Sense and Sensibility, the first of Austen's novels to be published, it is a timely look at the impact she has had on society, literature, entertainment, and language.

I have read my share of Austen biographies and so I found myself skimming the early chapters, which chronicle Austen's life and the responses of her own family and friends to her writing and modest fame. However, once I reached chapter 3, “Mouldering in the Grave," I was enthralled. Particularly interesting in that chapter was the description of the first James Fenimore Cooper novel, Precaution, which was a particularly awful rewrite of Persuasion. It was so bad that Cooper later claimed that he had never intended it for publication because it had "many defects in plot, style and arrangement..."

In chapter 5, "Divine Jane," I also found utterly fascinating the story about the French anarchist who translated Northanger Abbey into French and called his work Catherine Morland and it was "published in serial form in the Revue blanche in 1898, the first French translation to replicate rather than simply exploit Austen's text, reproducing as nearly as possible the elegant cadences and comical endstops of her prose."

Later in the same chapter, I discovered that P&P, Emma, and S&S were at the top of the "Fever Chart," a list of books recommended for use in military hospitals in the early 20th century. To quote Harman again, "...it is odd to think of how many damaged and dying men in field hospitals and convealescent homes might have swum in and out of consciousness to the sound or the memory of the words of 'Divine Jane.'"

As you can tell, the book is absolutely jam packed with interesting stories about unlikely people who found solace or inspiration from Austen's works, and it does a great job of showing how the explosion of communications technology over the past thirty years has helped create the Austenmania that still shows no signs of abating.

I enjoyed this book immensely--found it insightful, interesting, and credible. Definitely a must for any Austen shelf.

Here a fabulous image that I found on Claire Harman's site. 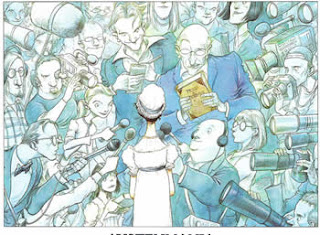