Cleopatra: A Life, by Stacy Schiff 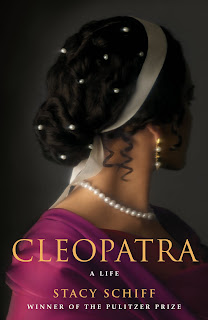 Cleopatra: A Life, by Stacy Schiff, is everything a biography should be. It is a fascinating, well-written, scholarly, insightful look at one of history's most compelling characters. It sorts the myth from the legend from the facts, and puts this remarkable woman firmly in context (the bridge between the Hellenistic world and the Roman world) and in perspective.

Making clear that the initial biographies of Cleopatra were written by the Romans who conquered her and Marc Anthony, this book does a superb job of showing Cleopatra as a strong, charismatic, and resourceful leader. The book is really divided into two parts--Cleopatra's rise to power and solidification of that power through her alliance with Julius Caesar, and her fall from power and the absorption of Egypt into the Roman Empire through her alliance with Marc Anthony. Despite structuring the book in this fashion, Schiff shows Cleopatra as completely her own person, mistress of her fate and more than willing to play the part of goddess incarnate.

Over the past few years, I have been reading up on the Roman Republic and Empire, so it was a real treat to learn about Alexandria, the one city that gave Rome an inferiority complex ~2000 years ago. Since virtually everything I know about ancient Egypt I learned from frequent viewings of The Ten Commandments when I was a kid, I also lapped up the info on the Ptolemaic dynasty and Egyptian culture and history, architecture, economics, foods, seasons, etc. Schiff painted a wonderfully rich and colorful picture of the pomp, luxury, ceremony, and atmosphere of Alexandria, circa 40 B.C.

I also loved hearing about Cleopatra's stormy relationship with King Herod of Judea (and how she became embroiled in his soap opera-esque family dramas), and other client kings, stories that only illustrated the guile, intelligence, and courage of Cleopatra.

Beginning to end, the book never dragged. This is a perfect example of why I love biography as a genre. Next on the list, Washington: A Life, by Ron Chernow.
at Friday, January 21, 2011