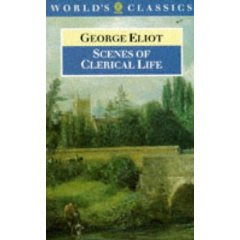 The Sad Fortunes of Rev. Amos Barton is the first of three short stories that constitute George Eliot's first fiction work, Scenes of Clerical Life. I think both the short story and the longer work suffer from overly pedantic titles. I have been looking forward to and talking about reading the bulk of Eliot's work this year, but I have to admit that I was a bit hesitant to dive into Scenes of Clerical Life because, frankly, it sounded a bit dull. Perhaps I was expecting something like Mr. Collins reading Fordyce's Sermons, but I have great faith in George Eliot, so plunged in last week.

Eliot did not let me down, and I enjoyed the story of Rev. Amos Barton very much, though his fortunes are, indeed, very sad. From the little bit I've read about Eliot (aka Marian Evans) thus far, this work was not only her first attempt at fiction, but also served as the laboratory in which she put into practice her theories about realism in fiction. To achieve realism, virtually every character in each of the three stories in Scenes of Clerical Life is closely modeled on people she knew whilst growing up in Coventry and Nuneaton in Warwickshire. The work was initially published anonymously, and apparently another former resident of these towns didn't contradict others who attributed the work to him, so Eliot decided to come forward and acknowledge that she had written stories.

Like so many Victorian stories, The Sad Fortunes of Rev. Amos Barton is a framed story, with the narrator telling the story of Rev. Barton, who was curate of Shepperton Church twenty years earlier when he/she lived there. Shepperton is a village akin to Eliot's Middlemarch and Elizabeth Gaskell's Cranford, and is peopled by not only the unfortunate Barton family but a plethora of gossips who inhabit both the great houses as well as the small ones and who are only too happy to tell the visiting narrator what they think of Rev. Barton.

After I finished the story, I was struck by how similar the Barton family was to the Bronte family--the leader of the family, a clergyman in both cases, loves his wife dearly, and shows his love by getting her pregnant almost continually from the time of their marriage. Like Mrs. Bronte, Mrs. Barton dies in her mid-30's, completely worn out from continuous childbearing, leaving behind a house full of motherless children, the oldest of which takes on the role of housekeeper and companion for the sad black-clad father. The twist to the story is that of the Countess, who scholars believe was a complete invention of Eliot's and my favorite character in the story. She is pretty, young widow who befriends the Bartons to the point where the inhabitants of Shepperton believe that Rev. Barton is having an affair with the Countess. Being moral, upright, hypocritical types, they shun the Barton family, although they all feel sorry for the ever-weakening Mrs. Barton. Shunning the Rev. means being tight when it comes to paying the curate for his services, and with a growing family, the Bartons sink further and further into debt. Of course, Rev. Barton is too proud to tell his congregation that they are mistaken about him and the Countess, and the good people of Shepperton don't realize that they have irreparably damaged the good Reverend and his angelic wife until it's too late.

The interesting thing about this story is the character sketch of Rev. Amos Barton--he is startling in his ordinariness. Characters like Jane Eyre and Molly Gibson, while their creators/narrators insist that they are ordinary, rise above the common herd because of their grit, integrity, compassion, or some other ennobling attribute. Amos Barton does not--he is a bit vain, a bit self-deluded, of average looks and capabilities but with a good heart. He has found a good woman who truly loves him, and he values her. His is an ordinary life, and Eliot's talent lies in her ability to make us care about him and his family despite his mundane story.

Having read and loved Middlemarch, Eliot's masterpiece, for years, it's interesting to see Eliot as she embarks on her voyage as a writer of fiction. She strikes me as methodical in her approach to her work. First she was an editor; then she was a translator; then she wrote non-fiction pieces on philosophy, art, literature, and politics. When she decided to write fiction, she started with vignettes of a way of life she knew intimately. I'll be interested to see whether the other two stories in Scenes of Clerical Life also read as a writing exercise--I'm expecting them to.

Despite reading like a writing exercise, Eliot's lovely precise yet sympathetic prose shines through--she seems to me a careful surgeon as she dissects and exposes the lives that inhabit her fictional world.

Here is her description of Amos Barton's oratorical skills in Chapter 2:

We read, indeed, that the walls of Jericho fell down before the sound of trumpets; but we nowhere hear that those trumpets were hoarse and feeble. Doubtless they were trumpets that gave forth clear ringing tones, and sent a mighty vibration through brick and mortar. But the oratory of the Rev. Amos resembled rather a Belgian railway-horn, which shows praiseworthy intentions inadequately fulfilled.

Here's my favorite line from the book, which I've already tweeted, I loved it so much:

Every man who is not a monster, mathematician or a mad philosopher, is the slave of some woman or other.

I may have to get t-shirts done up with this line on them!

With regards to striving for realism, a term that some scholars say Eliot was the first to use, her narrator says in Chapter 7:

For not having a lofty imagination, as you perceive, and being unable to invent thrilling incidents for your amusement, my only merit must lie in the truth with which I represent to you the humble experience of an ordinary fellow-mortal. I wish to stir your sympathy with commonplace troubles—to win your tears for real sorrow: sorrow such as may live next door to you—such as walks neither in rags nor in velvet, but in very ordinary decent apparel.

It will be interesting to see how Eliot's narrators evolve throughout the body of her work. The narrator in Amos Barton is very intrusive--telling us when we are going to leave one conversation and go eavesdrop on another.
at Saturday, February 06, 2010