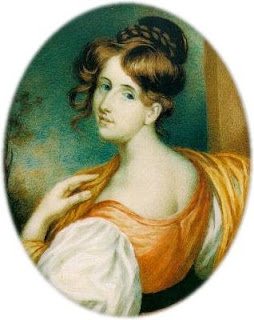 When I heard that The Classics Circuit was sponsoring an Elizabeth Gaskell tour, there was no question that I would participate…but which work to write about? I wanted to do something fresh as I had already written about most of her works already. Since I think Elizabeth Gaskell is as interesting as any one of her works, here are the top ten things I think any reader should know about Elizabeth Cleghorn Gaskell to more fully appreciate her work.

1. First off, Gaskell was her married name. She was christened Elizabeth Cleghorn Stevenson. At 21, she married William Gaskell with whom she had four daughters, all of whom outlived her, and two sons, the first, Willie, died at age 4 and the other shortly after his birth. Her husband encouraged her to write her first novel, Mary Barton, as a way of working through and out of her grief over Willie's death. He had also encouraged her to write travel articles from the earliest days of their marriage, and throughout their years together he was unfailingly supportive of her work, giving her as much personal freedom as she needed to juggle the many activities and obligations she took on. She was known socially and professionally as Mrs. Gaskell, a label that has stuck, much to my irritation, almost to the present day with literary critics discussing Jane Austen, George Eliot, Charlotte Bronte, and Mrs. Gaskell. Let’s all band together and just call her Elizabeth Gaskell!

2. She was born to Unitarian parents in Chelsea (i.e., London) and married a Unitarian minister who had a parish in Manchester--she's a lot like her character, Margaret Hale from North and South in having connections to both the north and south of England. As a Unitarian, she was more educated than many other women of her time and class, and her daughters were also well-educated. Her favorite book was the third volume of Ruskin’s Modern Painters III--this is not easy reading and just reading about this book gave me new respect for Gaskell's intellect.

3. Gaskell was her 40-year-old mother's eighth child in 13 years, six of whom had died. A year after Elizabeth was born, her mother died and she was raised by her Aunt Lumb and a bevy of women in Knutsford (south of Manchester). Although her father remarried, she only occasionally visited him and his second family, which included her older brother, John, underscoring her own personal rejection by her father. The narrator of Cranford shares a similar history with Gaskell.

4. Her brother, John, with whom she shared a loving correspondence though not a lot of actual time together, went to sea when she was 12, and when she was 18 he was reported lost at sea. A lost brother is a recurring element in many of her stories, with North and South and Cranford being two of the most prominent. 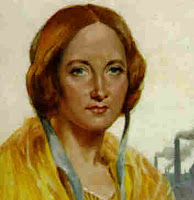 5. Gaskell travelled extensively during her married life with long trips to Germany, France, Italy and throughout Britain, particularly Wales, and many of her works are set in places where she visited. She was fluent in French and German, and possibly Italian. The novella My Lady Ludlow contains several multi-page sections in French. I skipped those parts! The novella The Grey Woman is riddled with German and French phrases and is set in France and Germany. She spent several months in Whitby chatting up the locals to get stories that eventually coalesced into a unified whole in Sylvia’s Lovers. Uncharacteristically, Lois the Witch takes place primarily in America, which she never visited.

6. She was born in 1810 and died in 1865 at age 55. She died of a heart attack in a house she had recently purchased with the proceeds from her writing and that was to be a surprise gift to her hardworking husband, whom she hoped to induce into semi-retirement in the south of England. Her final work, Wives and Daughters, was near completion when she died, and her publisher did have notes from her outlining the resolution of the story.

7. Married to a Unitarian minister, Gaskell was extremely active and saw her work, especially in the early years, as her contribution to easing social injustice and helping those less fortunate. She wrote some of the earliest “problem novels” in England and helped to put a human face on the poor, the ill, and the oppressed. For this, many of her own class criticized her severely, which caused her a great deal of distress as she liked to be liked.

8. Gaskell was a very social person—I’ve called her an “Elizabeth Bennet.” She was charming, witty, intelligent, well-read, pretty, vivacious, and flirtatious. Good at dancing, telling stories, and entertaining, she often over-extended herself and usually had a houseful of guests, a full social calendar, was a Sunday School teacher and philanthropist, read the latest novels, political tracts, newspapers, and wrote long novels often under the arduous deadlines imposed by serialization. She regularly collapsed in exhaustion and took bed-rest vacations to recover her health and spirits, often with one or more of her children but usually without her husband, who also worked himself hard as a minister, teacher (of the mill workers in Manchester, in particular), and good-deed-doer. Hence, she revised her works very little once they were written, and often didn’t even reread them once they were published.

9. Cranford was her favorite of her works—it was nostalgic, comfortable, and uniformly praised. It began as stand-alone stories in magazines, and then she collected them into a novel while she was working on North and South, a work she came to dislike because of the incredible pressure she was under to finish it, only to have the wind knocked out of her when Dickens published his own Hard Times first. She also fought vigorously with Dickens over the title, various plot points, the ending, and the length. She was good friends with Dickens’ wife, Catherine, and when he left her for Ellen Ternan, she never forgave him.

10. She knew many luminaries of the nineteenth century and was beloved by many and caused incredible frustration to others.

She was a close friend and mentor of Charlotte Brontë, who was six years her junior but infinitely less worldly and far less confident socially. Gaskell visited Charlotte in Haworth and Charlotte visited Plymouth Grove, the Gaskell’s house in Manchester, three times. Gaskell counseled her and encouraged her as if she were her older sister, and Patrick Brontë requested that Gaskell write Charlotte’s biography after Charlotte died. She did so, and novelized it to the point where legal action was taken by several people mentioned in the book and she was forced to revise it.

She was fascinated by Florence Nightingale, whom she came to know through mutual friends, and after much soul-searching ultimately rejected Nightingale’s more strident love of humanity for her more gentle love of the individual. Here is a post that I did on this topic.

She argued and fought with Charles Dickens during their professional relationship—he famously said "If I were Mr. Gaskell, O heaven how I should beat her!" and she ultimately sought her husband’s help as peacemaker when it looked as if they might come to legal blows.

Gaskell and Charles Darwin were distantly related and they admired each other’s work—she modeled Roger Hamley of Wives and Daughters on Darwin.

. It’s long but worth every minute. She provides not only a readable narrative of Gaskell’s life, friends, interests, and travels, but she also provides excellent critical analyses of her works.

, but I think Gaskell scholarship is quite a bit behind Austen scholarship and that is reflected in the two books.

The Gaskell Society is in the process of renovating Gaskell’s home in Manchester. They're also gearing up to celebrate the bicentennial of Gaskell's birth in 2010.

I have really enjoyed learning about Elizabeth Gaskell and diving into her works head first. She was a wonderful person, a gifted storyteller, a loving wife and parent, and, in many ways, a role model. Although she was a devout Christian who tried to help her fellow man through her writing and could have easily been ignored for her sentimentality and soapbox issues, her stories are masterfully created to present all sides of an argument and to respect the different points of view and the different circumstances that shaped her characters and their responses to life and to each other.

I spent last year reading the Uglow bio slowly while I read most of Gaskell’s works in the order they were written. If you scan my list of labels, you’ll find posts on all the novels and many of the stories and novellas. If you’re new to Gaskell, I recommend that you take a look at my post, Reading Gaskell for the First Time, in which I provide recommendations for the most enjoyable Gaskell works.

Enjoy the Gaskell tour, thanks for stopping by, and let me know what you think of this wonderful Victorian author.
at Tuesday, November 17, 2009