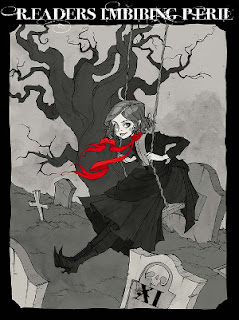 I signed up for the ever popular R.eaders I.mbibing P.eril Challenge this year and blithely set out to read four books.  I've got two of them under my belt, and I'm not sure if I will read the other two as horror is really not my favorite genre. 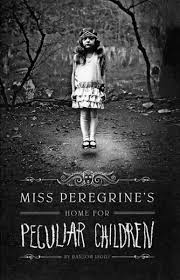 I read Miss Peregrine's Home for Peculiar Children by Ransom Riggs, which I thought pretty good. It was a fresh idea, an interesting twist on time travel, had a good dose of WWII, which is a time frame I'm currently much interested in, likable characters, and a healthy amount of tension and danger.  I like school stories and this was definitely a school story; it was a bit reminiscent of Harry Potter in that you have a very ordinary boy as the hero who becomes extraordinary because he has the courage to do the right thing.  There's also a Hermione type of girl character as well as an evil one who is disguised as a friend of the hero.  I'm not sure I loved it enough to read more in the series or to watch the movie, but it was a fun book. 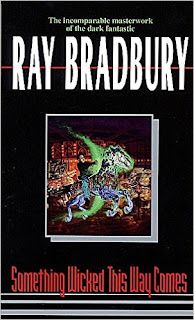 My second R.I.P. book was Ray Bradbury's classic Something Wicked This Way Comes. Published in 1962, it is very much a product of its time, reflecting the fears of rampant technology that characterized the Cold War.  Just as Miss Peregrine reminded me of Harry Potter books, Something Wicked reminded me of Frankenstein, especially towards the end with Mr. Electrico being revived.  I liked the idea of the carousel adding or subtracting years to one's life.

Both books dealt with the problems inherent in immortality--being stuck in a time loop in Miss Peregrine and being alive but not "living" and endlessly riding the carousel forward and backward in Something Wicked but not having anyone left to love or care about.

I'm glad I read both, but I have to say I felt a sense of relief when I finished.  Neither gave me a world that I particularly liked inhabiting.

I have to say that Something Wicked ended up being exhausting. Early in the book, I tweeted that I was surprised at how poetic it was, but my GoodReads summary when I finished it was a "hemorrhage of words--good story but an overwhelming metaphoric flood."

I like writing that is leaner, with the occasional poetic flight. Not sure whether this is typical of Bradbury or not, but I found it too much for my taste.
JaneGS at Sunday, October 02, 2016
Share