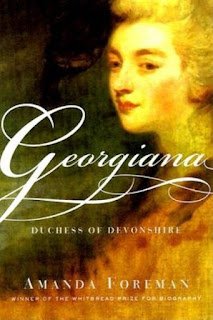 My first big book of the summer, qualifying for the Big Book Summer Challenge, is a reread of Georgiana: Duchess of Devonshire aka The Duchess, by Amanda Foreman. I loved it as much the second time around as I did the first time when I read it 15-20 years ago (in my pre-GoodReads days when I didn't keep track of when I read what).

Knowing the arc of Georgiana's story as well as her weaknesses, strengths, frustrations, and ambitions, I was more understanding of the predicaments she got herself into but no less frustrated. Without giving too many spoilers, she was a compulsive gambler and wasted so much time, money, and energy throwing away her husband's money, dodging creditors, and lying and scheming to get out from under the pressing weight of her debts, that it is a wonder she had time to do all that she was able to do in the political world of George III, William Pitt the Younger, and Charles James Fox.

I loved reading about her early days when she was the fashion leader of the ton. I was pleasantly surprised to read about her fascination and study of chemistry and mineralogy during her later years--I had completely forgotten that aspect of her story--she preferred going to lectures rather than socializing in her 40's and even had her own chemistry lab.  I also hadn't recalled all the writing Georgiana had done, poetry as well as fiction and plays, and how respected it was by the readers of her day. I felt the same level of frustration as before when I read about her adulterous husband preventing her from seeing her children when it turns out she had an affair of her own.

During this reading I also really noticed how Foreman depicted Bess (i.e., Lady Elizabeth Foster) as the villain in Georgiana's life, painting her as an insincere, conniving friend who everyone but the Duchess and her Duke could easily see through. It might actually be interesting to read a biography of Bess. Every narrative needs a villain, of course, and not many in Georgiana's circle truly liked her, but I do wonder how fair Foreman was with this portrayal. Georgiana loved her and confided in her until she died, which counts for a lot in the final reckoning.

This is an incredibly readable bio with just enough detail to make the Georgian world come alive but not mind-numbing with extraneous minutia. I felt that this time I was able to follow the political story much better than the first time around when I was more interested in finding out how Georgiana's life turned out than whether the Whigs or the Tories were in power. I also hadn't recalled what a scoundrel Sheridan was. Makes me think twice about liking his School for Scandal, in which he used Georgiana as a model for Lady Teazle to her absolute delight, without considering what else he was up to beyond writing plays.

As always, I enjoyed reading about Georgiana's travels throughout Europe, particularly her time in France before and during the Revolution. I find Georgiana to be a fascinating historical person--charming, intelligent, democratic, and brimming with life and wit.

Here are my thoughts (from 2009) about the movie The Duchess, starring Keira Knightley as Georgiana. 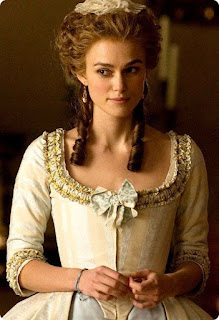 Finally, I found myself thinking a fair amount about Princess Diana while reading this bio. There have been many articles noting the parallels between the lives of Diana and Georgiana, who was her great-aunt many times over (Georgiana was a Spencer too). Here is a pretty good NYT article on the topic.