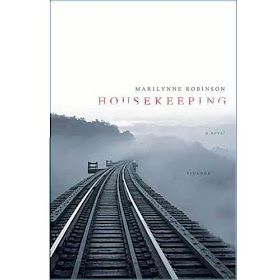 Housekeeping by Marilyn Robinson is one of those books that keeps popping up on must-read lists or group-read lists.  I really didn't know what to expect going in, but having read it, the cover finally makes sense.  It shows a railroad track going off into a fog with just the barest outline of the barrier-less bridge over the chasm that the railroad spans. Even the words of the title are blurred by fog. It is a brilliant cover and completely captures the themes of the book and the ambiguity of the journey the characters take in it.

I seem to be reading a lot of stories about sisters lately, and this is another one, but I really cannot draw a parallel to the other sister stories recently read (Sense and Sensibility, The Nightingale, The Small House at Allington) because this didn't follow the traditional sister motif of the others.

Housekeeping is narrated by Ruth, the younger of two orphaned sisters, who live in Fingerbone, a fictional semi-rural small town in western Washington first with their grandmother and then with batty Aunt Sylvie after their mother commits suicide. Ruth and her older sister Lucille are waifs, struggling to grow up and make sense of a world and community and family in which they don't seem to fit or have a place.

Published in 1980, the setting is in what feels like the 1950s, with Ruth reminiscing about her youth, and her grandmother's house and how she and Lucille and Aunt Sylvie try to keep the house and their lives moving forward and not derailing.  The story is heavy with house imagery and metaphors, traveling imagery and metaphors.  Lucille opts for safety--living within the norms of society, bridges with railings, houses with roofs.  Ruth tags after Sylvie and takes a leap of faith that the world will provide what her life requires for sustenance and that traveling is preferred to keeping house, staying put.

Ruth and Lucille live in a house that slowly disintegrates through lack of routine care that they as children cannot provide.  They also find various substitute homes--a cave, a boxcar, a boat.

This is a multi-layered book.  It is a somber story with an oppressive tone.  It is brilliant and thought-provoking and unsettling.  It is literary.  But is it good?  Yes, I think so.  I'm glad I read it, but I'm not sure I would ever reread it.  I felt a sense of relief when I finished, though I thought about for a good long while afterwards.

This was one of the books I selected for my TBR Pile Challenge for 2016, and is the 7th book out of the pile that I've read this year. 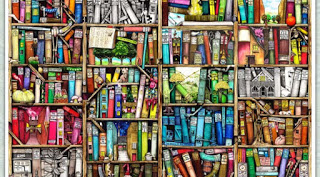